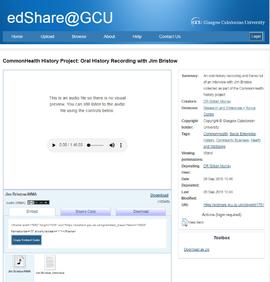 This item is an interview with Jim Bristow recorded by Dr Gillian Murray on 27 April 2016 as part of the CommonHealth history project. It is the oral history of Jim Bristow's involvement in community work and the community enterprise movement from the 1970s to 1990s. Click on the 'Download audio' link next to the icon above or on the URL link in the metadata section below. This will take you to the Glasgow Caledonian University edShare page where the items can be previewed and downloaded.