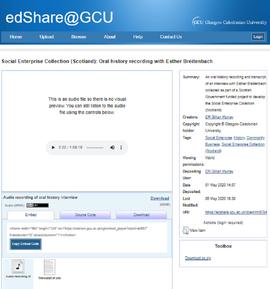 This item is an interview with Esther Breitenbach recorded by Dr Gillian Murray in September 2019 as part of the Scottish Government funded Future Development of the Social Enterprise Collection (Scotland) project. It is the oral history of Esther Breitenbach's involvement in community education and community enterprise from the 1980s to 1990s. Click on the URL link in the metadata section below. This will take you to the Glasgow Caledonian University edShare page where the items can be previewed and downloaded.

Esther Breitenbach worked in adult community education in the 1980s, including an Urban Aid project in Ferrier Sandilands, Aberdeen, between 1981 and 1984; the Central London Social Security Advisers Forum (London); Scottish Education and Action for Development (SEAD), Edinburgh. She returned to Aberdeen in 1989 to work for Community Business Grampian. In 1991 she took an opportunity to combine her community education work with research as part of the Pilton Partnership, Edinburgh. Since 1991 she has undertaken research and teaching in Social Policy at Glasgow and Edinburgh Universities, including secondments from the University of Edinburgh to the Scottish Executive Equality Unit, and to the Women and Equality Unit in the Department of Trade and Industry. Esther was Visiting Professor at the Institute of Governance, Public Policy and Social Research, Queen's University Belfast, from 2003-2005. In 2005 she obtained a PhD from the University of Edinburgh. Since then she has held the positions of Postdoctoral Fellow, Teaching Associate, and Research Fellow in the School of History, Classics and Archeology.